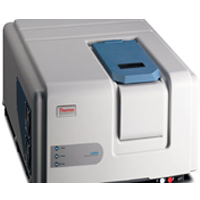 Fluorescence is the emission (after an initial photon absorption process) of radiation to a lower state of energy from an excited energy state with the same multiplicity. In here, returning to the lower state is a spin allowed process and happens rapidly by emission of a photon (huF in the above Jablonski diagram). Accordingly, fluorescence occurs about 10-5-10-8 s after the photon absorption. In phosphorescence, the electron spin changes, which is a spin forbidden process. It results in a longer lifetime of the excited state and typically phosphorescence occurs seconds to minutes after the photon absorption (hup in the above Jablonski diagram).

All fluorescence instruments contain three basic items: a light source, a sample holder and a detector (scheme below). In addition, the wavelength of incident radiation needs to be selectable and the detector signal needs precise manipulation and presentation. For those purposes excitation and emission monochromators are used. Commonly used light sources in fluorescence spectrometry have spectral outputs either as a continuum of energy over a wide range (Ex: Xenon arc, tungsten-halogen lamp) or as a series of discrete lines (ex: mercury lamp). The light passes into the sample cell causes fluorescent emission and the light emitted enters the emission monochromator, which is positioned at a 900 angle from the excitation light path to eliminate background signal and minimize noise due to stray light. Typically, in fluorescence instruments, photomultiplier tubes are used as detectors.

A schematic representation of a fluorimeter

The IC-FAS is equipped with the Thermo Scientific Lumina Fluorescence Spectrometer for steady-state fluorescence measurements. It has the following main specifications.

The instrument is also supported with Luminous software. At present, we have the capability of analyzing both liquid and solid samples. With the existing solid sampling accessory, the fluorescence intensity can be measured on wide range of solid samples such as thin films, powder and granular samples. For the liquid sample measurements, regular single cell holder or multi-position cell holder can be used depending on the requirement. Especially for the temperature controlled experiments multi-position cell holder can be used for great temperature accuracy and reproducibility.

Although fluorescence is a very sensitive technique it can be commonly interfered by trace levels of organic chemicals. For an example, the oils secreted by the skin of the researcher is a possible source of this type of contamination. Therefore, an extreme care should be taken during the sample preparation time. Solvents should be of the highest-level purity obtainable commercially. Suspended particulates such as dust and fibers should not be there in your sample as they will float inside the sampling area of the cuvette leading to scattering effects. In addition, factors like the temperature, pH and light can affect the quality of the result. So, the researcher must take precautions to control these parameters. A minimum of ~0.5 ml sample can be used with an appropriate solvent in a standard 10 mm quartz cuvette for the analysis.

Click following link for the reservation of the Fluorimeter