Home / News & Events / The electronic science teacher who went beyond the standards, bids farewell to life…..

The electronic science teacher who went beyond the standards, bids farewell to life…..

The electronic science teacher who went beyond the standards, bids farewell to life….. 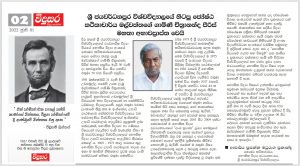 Malwattage Chithrananda Peiris, a former senior lecturer in physics at the University of Sri Jayewardhanapura passed away on 30 May 2022 at the age of 71. He was a student of mine and a research collaborator who I approached when I encountered difficulties in mathematics.

Born at Udahamulla, close to Nugegoda, Chitrananda rarely moved beyond a radius of a few miles from his home. After attending nearby schools, Wijerama Maha Vidyalaya and Pannipitiya Dharmapala College, he entered the Vidyodaya (present day Sri Jayewardhanapura) University in 1970 to pursue a science degree and continued to work there as a lecturer until retirement.

He loved thoughtful scrutiny of everything in a home environment and abstained from extravagances to the extreme. Yet, having lively blood and flesh and a superb brain, he wasn’t a recluse, but a man full of intellectually motivated pleasures and desires.

Some referred to him as eccentric, because he stood astronomically above the average in understanding. Many ignored him as he was not pretentious. He was tolerant, but sometimes stubborn because of strong conviction and avoided distractions.

Never been to Kandy, he did not respond when I invited him to visit the Institute of Fundamental Studies – perhaps thinking the reply would offend me.

His father was a workman at the Railway Complex, Maradana. A curious man who admired locomotive machinery and told him stories about engineering marvels of the Ceylon Government Railway (CGR). Father wanted his son to be a technician at CGR. Having passed G.C.E (A-Level) earning distinctions more than sufficient to enroll in a faculty of engineering, he opted to follow a physical science course at the Vidyodaya Campus – a stone throw away from his home.

As a student, Chithrananda, did not present himself as an enterprising individual. However, teachers at the University noticed his unusual originality in solving mathematical problems and experimental innovations. When I joined Vidyodaya in 1972, he was a third year student. Generally shy, but eager to engage in discussion, he gave precise answers to questions confidently. Prof P.W. Epasinghe, Chair, Mathematics, told me Chithrananda derived a formula for iterative calculation of a trigonometric function, superior to all methods reported in literature. In such calculations, mathematicians refer to a criterion termed the fastness of convergence. I was amazed to learn how Chitrananda as a novice succeeded in grasping an involved concept independently. Dr. Mahendra Wijesinghe who introduced electronics to Chitrananda, described him as unique and incomparable.

All of us, knowing very well the capabilities of Chitrananda, wished he gets a permanent position at the Department of Physics. Initially, he was appointed as a temporary demonstrator and worked with me and Dr. Wijesinghe assisting laboratory classes. Unfortunately, as per Grants Commission regulations, appointment to a permanent position required a four-year special degree with first or second class honors. Vidyodaya didn’t offer special degree programmes at that time. With a first class three-year degree plus outstanding accomplishments, Chitrananda would have easily obtained a placement in a foreign university to qualify, but he declined to go abroad. Instead, proposed to register for a post graduate degree at Vidyodaya, with me as the supervisor. Late Prof. P.C.B. Fernando, then the Head of the Department of Physics told him, if you are unwilling to do studies abroad, you at least go outside Jayewardhanapura for a while and engage in research to earn a higher degree. You require that kind of ‘away from home’ experience and advised him to meet Dr.S.Gnanlingam at the Ceylon Institute of Scientific and Industrial Research (CISIR), Colombo. Dr. Gnanlingam, a strict personality normally insisting Cambridge style credentials, was not impressed by Chitrananda. Nevertheless, he instructed Chitrananda to see him again after two weeks. When Chitrananda met him for the second time, he assigned him the problem of designing a receiver to capture weak echoes of radio signals from the ionosphere, instructing him to work in the CISIR laboratory for at least two-three days a week. After about a month later, Dr. Gnanlingam complained Chitrananda is not coming to CISIR, he cannot undertake any responsibility. When Prof. Fernando angrily inquired, Chitrananda said, he has already done much work and plans to finish it soon. Few weeks later Dr.Gnanlingam telephoned informing Chitrananda met him for a third time and presented an astounding solution to the problem and a prototype receiver he fabricated. Chitrananda had been working at home to build the receiver at his expense, when all of us believed he was in CISIR. That is how Chitrananda obtained his Master of Philosophy.

After theappointment as a lecturer, Chitrananda devoted his entire time to teaching and hobbies. For him hobbies and research were synonymous. He never worked for reputation or profit, but self-satisfaction and curiosity. Every now and then he came up with something novel, either an experiment or explaining a concept. He monitored his health as an ongoing experiment with electronic instrumentation he had improvised, and infrequently visited doctors with an understanding of the condition. Indulged in music for artistic pleasure as well as a scientific investigation. He invited students to his home and discussed physics and philosophy while playing the violin and singing.

Many times he pointed out repetitive errors in textbooks used for generations. When I was a student at the University of Colombo; the experiment given to me for a practical examination was to measure the density of iron using a sonometer- a familiar instrument in used in elementary physics laboratories, resembling a guitar. The answer I got was half the actual of the density of iron. Knowing very well the result I got had been wrong, without manipulation I wrote it down in the answer script. The professor gave me 13 marks out of 100, and I failed the exam. When I mentioned this to Chitrananda, he immediately conducted an accurate measurement using his electronics knowhow, proving that the answer I got originated from a textbook error overlooked for years and not my fault.

The smartest people love music. Chitrananda was not only a fan of music, but deeply understood physics behind and possessed the technical skill to improvise musical devices. From his school days, he had been meddling with electronic circuitry to catch Doordarshan. His unconventional approach to electronics and precision in calculations attracted the attention of students and teachers.

I was struggling with a mathematical problem that cropped-up in my research – searching literature and consulting qualified mathematicians. When I asked Chitrananda whether he could solve it. He said, I will try it once I go home for lunch. Routinely, Chitrananda leaves for lunch around 12 noon and punctually returns after about an hour. That day he returned to the campus two hours late and gave me three sheets of paper wherein an elegant solution to the problem is neatly written. What I couldn’t do after weeks of contemplation, hours of referencing at the library and discussions with mathematically competent colleagues; Chitrananda finished in one stretch during his lunchtime!

Chitrananda contributed so much to the furtherance of the University of Sri Jayewardhana for nearly half a century. Three years as an inspiring student and forty odd years a teacher par excellence, but ignored personal advancement. Not interested in writing papers, neglected collecting material necessary for obtaining quick promotions.

Generally, persons who gain faculty positions; being overly conscious of promotions devote a large portion of time in writing papers and getting them published. Today, the quality of research is fashionably judged by citations, statistically analyzed in databases; Google Scholar, Scopus and Web of Knowledge. A print- out from these sources, recognized as a measure of research credibility, is sometimes a stepping stone to work less and earn a higher wage. Also, the details extracted from the databases can be manipulated to boost one’s image – some delete the name of the leading author, from list of co-authors. Chitrananda never resorted to build an academic record that way. His contribution, if evaluated without counting numbers was certainly sufficient to grant him a professorship. When Prof.Dhammika Tantrigoda, Chair of Physics, persuaded him and asked why he is not claiming the due promotion. He has said, I do things for my satisfaction and don’t want to get distracted.

The case of Chitrananda points to a delusion in the promotion schemes of our universities. The schemes should have the provision to waive rigid rules under exceptional circumstances. A challenging problem could take years of concerted effort to find a solution. One single finding of this category, published once in a way, counts more than hundreds of ordinary papers.

Exceptionally brilliant persons also have weaknesses. To achieve, the talent alone wouldn’t be sufficient. Hard work to face challenges and engagement with the competitive world drives people towards success. Chithrananda lacked this quality, he did not wish to expand his domain, interact with the world and move to the frontier. Being a man who had grasped statistics and probability theory to the fullest; Chitrananda maintained the view that good and bad (including sicknesses) one encounters are largely random and not attributable one or more specific causes or karma. Possibly because of this philosophy, Chitrananda didn’t plan for future prospects. And because of modesty and honesty, he did not go for short-cuts.

The inexhaustible knowledge gets exhausted and what remains, although inexhaustible is harder and more involved to disclose. While working as a clerk at the Swiss Patent Office, Albert Einstein revolutionized the world of science. Today, it would be impossibly difficult even for an exceptionally brilliant person, working in isolation to make groundbreaking discoveries-the reason why Chitrananda couldn’t reach his inherent potential to fullest extent.

Truly talented persons who didn’t tune their positions for fame or material benefits and not recognized by the average minded establishment, need to be remembered and appreciated.

The author can be reached via email: ktenna@yahoo.co.uk